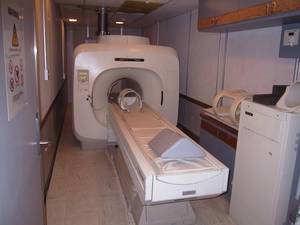 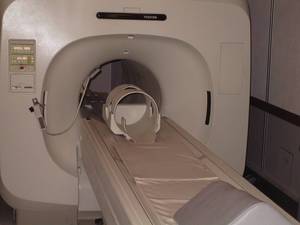 A closer view of the MRI machine. Here is the MRI machine room, where you get to lie down and relax while listening to the quaint sounds of banging magnets. 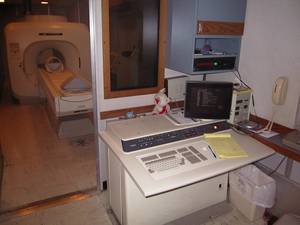 Here is the console that controls the imaging process. Getting a good MRI is a tricky process, and there are many adjustments that have to made in order to get a good image. It takes training and practice to get it right. 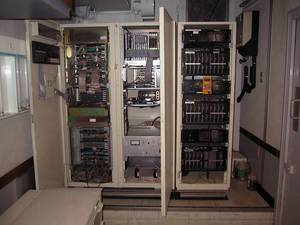 These are the computer banks and electronics that turn the faint signals that come out of the MRI machine into a usable image. There are three sets of identical computers on the right hand side, one for the X, the Y, and the Z axis portion of the image.

As you know, I like to try to understand how things work, so I did a little research on MRI principles. In a very oversimplified description, what an MRI does is to take pictures of water, specifically the proton (in the nucleus) of hydrogen atoms. How does it work? (I'm glad you asked!) Well, each proton in a hydrogen atom has what is called a magnetic moment, which means it acts like a tiny magnet. Now as any owner of a compass can tell you, if you put a small magnet next to a big magnet, the small magnet will "line up with" the big magnet. Well an MRI machine is a VERY BIG MAGNET. How big, you ask? Well, Enrique told me about the time there was a new guy polishing the tile floors in his Mexico city lab. He wasn't paying attention, and opened the door to the MRI lab. The next thing he knew, he and the hundred pound floor polishing machine were dragged into the middle of the MRI magnet, where they remained until four very strong men pulled like hell to dislodge it. Like I said, an MRI machine is a VERY BIG MAGNET, which makes some of the protons line up along the field of the magnet. Now another fundamental principle that you need to know is that when light interacts with matter, quantum physics tells us that this interaction only happens when the light has the "right energy" for the matter it is interacting with. For example, visible light interacts with wood and concrete, and everything we call "visible" but it doesn't interact (very much) with air. Similarly, X-rays don't interact much with human flesh, but are strongly absorbed by bones. Well, it turns out that when light has a particular energy, which happens to be in the radio spectrum, it interacts strongly with protons. Thus an MRI machine generates a pulse of this radio light, which causes some of the protons to flip in the classment. Instead of lining up with the BIG MAGNETIC FIELD, they line up opposite to the field. Then the MRI machine waits for the protons to flip back, emitting their own (tiny) pulse of radio energy. It is this pulse which is detected, and used to generate the image, and as you can see, the strength of the detected pulse depends on how many hydrogen atoms happen to be at the point we are probing. Since humans are over ninety percent water, we have lots of hydrogen atoms (remember H2O) everywhere, so an MRI machine can generate images of just about anything.

Whew, that's probably more than you wanted to know about how they work, let's get back to what you can do with them. Enrique told me that the three most common uses are to image the spine, the brain, and the joints. In the spine, they can detect disk problems, vertebrae collapse, and tumors. In the brain, they are used to find tumors, lesions, aneurisms, and signs of Alzheimer's disease. Orthopedic doctors use them to get to the bottom of knee, ankle, hip, or any other joint problem. You can also image the arterial blood flow around just about any organ. In sort, they are a true non-invasive window into the body.

Quote of the day:
If you look like your passport photo, you're too ill to travel
will Kommen

Sitemap
Go up to Resomaz, Mazatlan's Imaging Center Go up to Some Local Businesses you might Consider Go up to What Others Say Go up to General Information on Mazatlan Go up to Home Page of Nadine Loves Henry
Go back to A Tour of Resomaz -1- Continue with Some sample MRI images