Welcome to your own virtual Pro Mexico house tour. This event is put together each year by Vivian Guzofsky, who is always looking for volunteers to help her. After you've checked this out, I'm sure you'll be ready for the real thing. We go every year, and have always enjoyed it. If you're planning a trip during the month of February, stop by the El Cid clubhouse and see if there are still some tickets available. 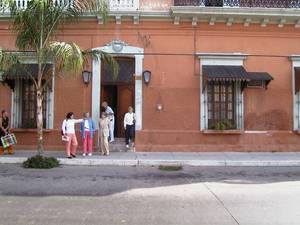 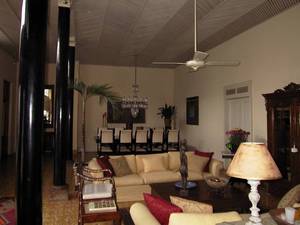 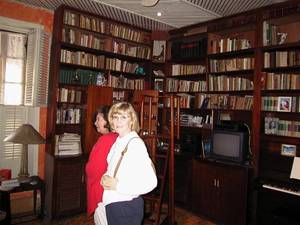 Never judge a book by its cover! One of the things you discover on these house tours is that some of those shabby looking houses you see downtown hide a magnificent interior. That was the case here, and you can see Nadine standing in front of what looks like a pretty ordinary pink house in the El Centro area. Notice the peeling paint on the top. Step inside and you'll find one of the largest living rooms and dining rooms you've ever seen. And a magnificent library. This is the residence of Alfredo and Carmen Gomezrubio and their three children. During the Mexican revolution of 1910 it served as a headquarters for the soldiers. The family had to hide in Guadalajara because they were friends of the dictator Purio Diez. The house was rebuilt by S. Manuel Gomezrubio in 1913. The tile floors and a marble statue of Seres, the goddess of fertility are original. The Carrane marble was brought to Mexico from Italy when the Palace of Fine Arts was built in Mexico City. There is a mango tree in the courtyard that was planted by Alfredos great grandfather more than 130 year ago. The French lithography in the library dates from 1874. The family owns the popular Pedro and Lola's restaurant on the Plaza Machado and they are also building The Melville, an luxury guest house in the historic central district.
2A Centinario [top] 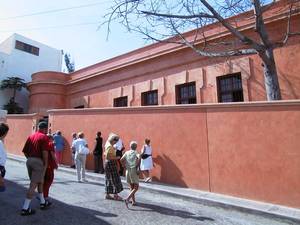 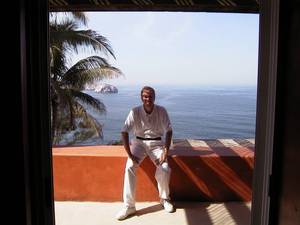 This is the residence of the Rodriguez Garcia family. The original house was built at the beginning of the 19th century, in a French style that was popular at the time. A famous revolution her, General Ramon F. Iturbe rebuilt it in 1906 when he was governor of the state, but he never got to live in it. The Haas family lived in it for a long time, and it was passed on to a daughter who married Sr. Roberto Patron. The house was purchased from the Patrons and left abandoned for many years. The current owners basically rebuilt the house from ruins about two years ago, but the inside walls and the facade are original. It sits high on a hill overlooking the ocean and the waves crashing against the rocks about one hundred meters below. Henry is sitting on the railing of the balcony from the master bedroom, with the ocean in the background.
32 Avenida del Mar [top] 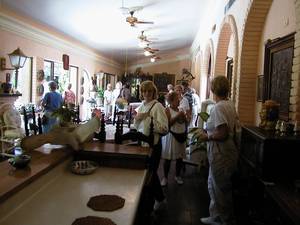 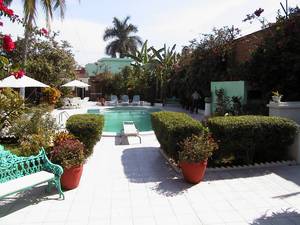 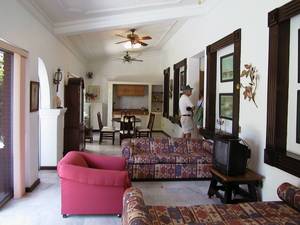 Again this house looks very ordinary from the street. It is on the Avenida del Mar, the long street you drive down as you go from the golden zone to El Centro. We never saw the actual home, just the party room pictured here on the left. It was a very long room with a kitchen, bar, and tables and chairs for a big party. Behind it was the pool area and pictured here on the right, is the guesthouse, which is behind the pool. The house is the residence of Ruben and Nini Espino. The home was built in 1965. They have five children and thirteen grandchildren. They also have a house in Bologna, Italy where they spend many months each year. Nini speaks fluent Italian. The family owns the Indio shops and restaurant properties in the golden zone.
1254 Fuentevilla - Marina El Cid [top] 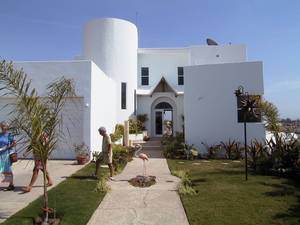 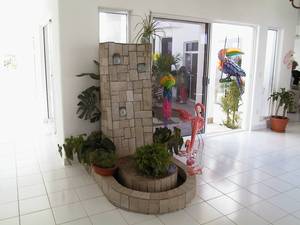 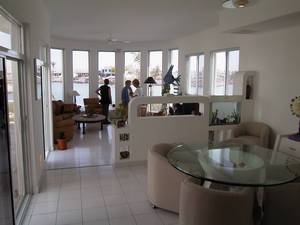 This house was really fun. Not only is the exterior an interesting design, but the fun really starts inside. The exterior has just about every regular geometric shape there is, spheres, triangles, and squares. The inside was bright and cheery, and filled with all kinds of eclectic goodies. We particularly liked the fountain pictured here on the right. There were colorful plastic birds everywhere, which make everyone smile who saw them. This is clearly a happy house. The house is owned by Pasquales and Sherry Caia. They are both from the San Francisco area, and have been married for two years now. Sherry is a commercial interior designer, and visited Mazatlan from a cruise ship. Pasquale had some businesses in San Francisco, including a restaurant on fishermans wharf. She was so impressed after a tour that included the El Cid resort, that she conviced her husband to sell out and move down here. Sherry designed the house, and the plans were perfected by Architect Roberto Fuentevilla. The unique items in the home were ordered over the internet.
734 Reino de Navarra - Marina El Cid [top] 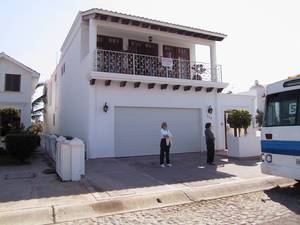 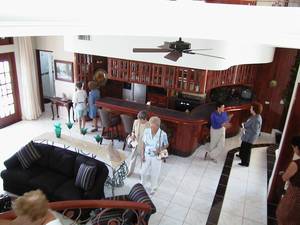 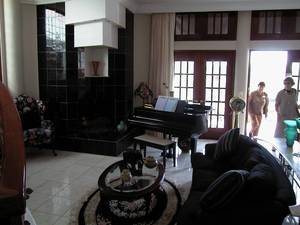 at the far right photo, the one that looks like a bar. Looks can be deceiving for in addition to a bar, that is the kitchen. If you look closely you'll notice the brushed steel sub-zero refrigerator. The house is the residence of G.W. and Donna Bulman, who have been married for nine years now. They lived in Houson until G.W. retired from UPS. Donna has always wanted to live in Seattle, but during a vacation to Mazatlan they decided to change their lifestyles. What started out as a vacation home has turned into a more permanent arrangement.
Gabriel Ruiz and Malibu [top] 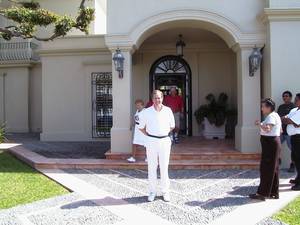 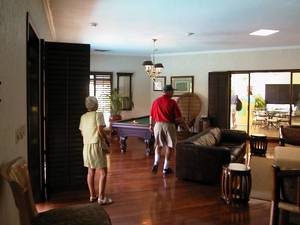 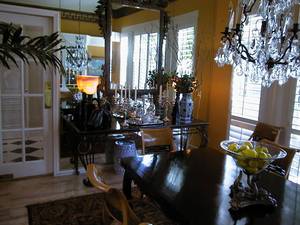 This was a very nice house in the El Dorado district of Mazatlan, just outside of the El Cid development. This house is just filled with interesting things from far away places. It is the home of Esther and Chuey Juarez. Esther's sister, Charlene, is our next door neighbor. Chuey owns the Shrimp Bucket restaurant, here in town, and Esther's cousin was Carlos Anderson, the founder of the Anderson chain of restaurants. They have been living in Mazatlan for over 30 years, and currently (2000) have 4 children and 2.5 grandchildren. Esther is a member of Pro Mexico and helps the Franciscan Missionary in Colonia Allende.
Quote of the day:
Isn't it nice that the people who prefer Los Angeles to San Francisco live there?
Herb Caen