More Images of Mazatlan
These shots were taken from the top of the El Cid hotel, and provide an overview of the area where we live. The images at the left are 20% of their actual size. To see the full sized image, just click on the corresponding picture at the left. 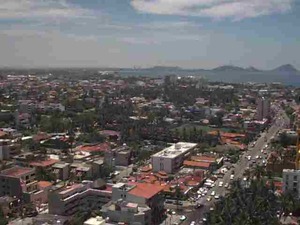 In the foreground is the golden zone, or Zona Dorada, which is where most of the tourists stay. The background is old Mazatlán. On one of the hills in the background stands a lighthouse that is the tallest in Mexico. The view from up there is tremendous, and at the base is a great shrimp restaurant. The main street begins at the very northernmost part of Mazatlán, and runs along the beach all the way into the old city. In this picture we are looking southeast along the street called Camarón Sábalo. 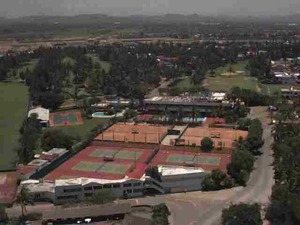 As you can see, there are five composition and four clay courts that belong to the El Cid country club. Two of the composition courts are obscured by the building in the front, which houses the El Cid homeowners association offices. Behind the courts is the El Cid clubhouse, which has an Olympic size pool, good restaurant and bar, changing facilities, exercise equipment, and video game room. The restaurant features Italian buffet night every Wednesday, and currently is hosting a Bingo night on Thursdays. There is also a play area for the kids, featuring a basketball court, and another small swimming pool with a neat rock slide. Behind the clubhouse is the beginning of the El Cid golf course. We are looking east into the El Cid resort. 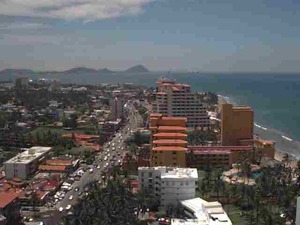 A shot due south, along the beach. The large orange building in the foreground is the Costa de Oro hotel, home of the best chilaquiles in Mazatlán. This is a traditional breakfast food, which consists of small pieces of tortilla in a mildly spicy tomato sauce, one of my favorites. They have a wonderful beachfront restaurant, that is one of our breakfast hangouts. There is also a small animal park on the grounds, with deer and exotic birds. The large building just behind the Costa de Oro hotel is one of the newest timeshare resorts in Mazatlán, called the Royal Villas. The street at the left runs from the golden zone all the way to the heart of downtown old Mazatlán. 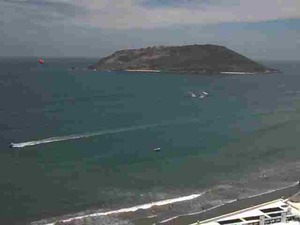 There are two islands just offshore. This is the one slightly to the north. The other one is the destination of a large amphibious "truck" that takes tourists there for a picnic and some snorkeling. The northern island is usually the destination of the little hobie cats that you can rent on the beach. On the left side of the photo you can just make out a parachute. Parasailing is very popular on the beaches here, and costs about $30 for a ten minute ride. I've gotten some email questions about whether or not there are sharks in the area. All I can say is that I subscribe to the local newspaper, and while they report daily on stolen bicycles, I have never seen mention of a shark attack, which I am sure would be considered a newsworthy item. 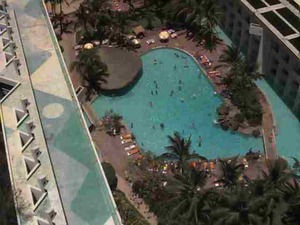 Here we are looking down on about half of the pool at the El Cid hotel. There is a swim up bar under the large thatched roof on the left. The pool continues to its other half at the bottom right of the picture by swimming under a small bridge. It is billed as the largest pool in Mexico, and I would not doubt that. It is a great place to come to "hang around the pool" for a day. In the other section, there is a large rock island that provides a jumping off point for the kids. There is also a nice waterfall that gives you the feeling of living in the tropics. 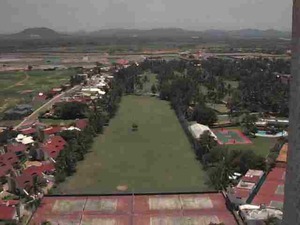 The driving range, part of the El Cid golf course. There are four more tennis courts at the bottom of the photo, and to their left are the "Tennis Villas," one of which we own. The tennis courts have just been resurfaced this year, and are now in perfect condition. In the background is the new El Cid Marina development, which is where we live these days. You can just make out the marina keys, if you squint a little and use your imagination. Some photographers, who are much better than I, have provided me with some samples of their work for all of you to enjoy. Please have a look. It is almost as good as being here.
Quote of the day:
For every action, there is an equal and opposite criticism.
Alan Cundall