A Visit to the Shelter
On April 11th, 2007, I visited the Amigos de los Animales animal shelter here in Mazatlan. I took these photos to give you, the general public, some idea of what we have to deal with on a daily basis.

Believe it or not, this guy with the bone sticking out of his leg is a very lucky dog. Unlike humans, who when run over by a car can expect if not assistance from the driver, then at least assistance from others around, and eventual prosecution of the driver; dogs and cats have no such luck. They are generally left at the side of the road, to bleed to death (relatively quickly if they are fortunate) or to die slowly of thirst and hunger if they are not. This guy was very lucky. Someone picked him up and brought him to our shelter here in Mazatlan. His leg is due to be removed later today, and we expect him to make a full, through three legged, recovery. By the way, dogs get around just fine on three legs, and unless you look closely, you probably wouldn't even notice that a leg is missing if the dog is out running around. So while at our house, "a dogs life" can be a good thing, in general the life of a dog in Mazatlan isn't one you would wish on any creature you care about. Amigos de los Animales is a privately supported shelter, and gets no government grants or support of any kind. It currently costs about $3000 USD per month to run the shelter, which includes salaries, medical supplies, crematorium fees, food, bleach, gas for the truck, and a myriad of other little expenses that creep in. So please, if you have a chance to help us out financially or otherwise, please do so. It's guaranteed to raise you karma quotient. 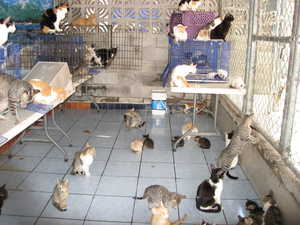 To leave you on a happy note, there are always lots of cats available, ready and waiting to be spoiled by you, their new human. All you need to do is grovel and give in to their every whim, and then maybe, just maybe, they'll deign to sit on your lap and purr a little.

Quote of the day:
No man can be condemned for owning a dog. As long as he has a dog, he has a friend; and the poorer he gets, the better friend he has.
Will Rogers

Sitemap
Go up to Service Organizations of Mazatlan Go up to General Information on Mazatlan Go up to Home Page of Nadine Loves Henry
Go back to Make Art, Make Money Continue with Surround yourself with Butterflies 2009